What’s the Deal with the ACT Science Section?

This is the third piece in our series of ACT posts, this time focusing on the Science section.

The full name of the section is technically the “Science Reasoning Test,” which alludes to the fact that the test is mostly assessing your reasoning ability, not your knowledge of science content. This is an important distinction, as studying all areas of science for the test isn’t really feasible, nor necessary. Instead, what you need to focus on to do well on this test are 1) reading comprehension, and 2) data analysis.

These questions require you to interpret the results and design of experiments.

To answer this question, simply note the difference between the results in the “before shaking” and “after shaking” columns of the table. Both trials saw increased roll times. There are no inferences to draw beyond this. These are typically the easiest questions in the Science section, as they rely on literal information provided in the passage.

These questions are all about analyzing the figures provided. Some will simply ask you about what is literally represented in the figure, but many will require more comprehensive inferences. 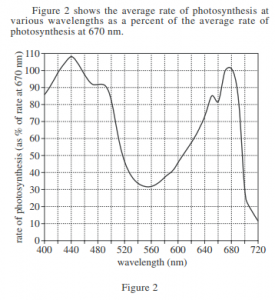 These questions ask the reader to make deductions using information from write-ups of multiple experiments or hypotheses. 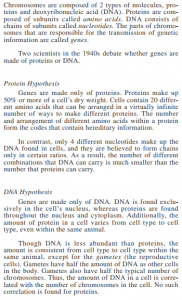 According to the Protein Hypothesis, which of the following observations provides the strongest evidence
that genes are NOT composed of DNA ?
A. DNA is composed of only 4 types of nucleotides.
B. DNA is composed of smaller subunits than are
proteins.
C. DNA is abundant in both the nucleus and the
cytoplasm.
D. The concentration of DNA is generally consistent
from cell to cell.

The paragraph beginning with “In contrast…” makes it clear that since DNA is made up of only four different nucleotides, there aren’t enough different combinations of them for DNA to make up genes.

All of these questions can be answered with minimal science content knowledge, instead requiring reading and analytical prowess. When preparing for the ACT Science section, focus on developing these rather than trying to study any one field of science.

Mike Constanza is the Director of Learning and Technology for Silver Oak Learning K-12. His expertise is primarily in reading, writing, SAT and ACT prep.

Is the ACT Really Easier than the SAT?

Algebra II, the SAT, and the ACT

AP Courses and Their Alternatives

AP vs. Honors vs. IB vs. Dual Credit: Which is right for me? Course selection is a matter of both planning and luck in many districts. What courses are students prepared for, which courses fit their schedule, and which still …

AP Exams: The Myth of Passing

As Advanced Placement courses become more widely available to high school students, more families are looking at the exams and wondering what constitutes a passing score? However, the College Board (also maker of the SAT exam) is very careful not …

What Is Study Skills?

Imagine a scenario: Your child is entering high school, a brand new 9th grader. They’re coming from a smaller, familiar middle school, where they were comfortable with all the teachers, schedule, and layout of the building. But on the first …